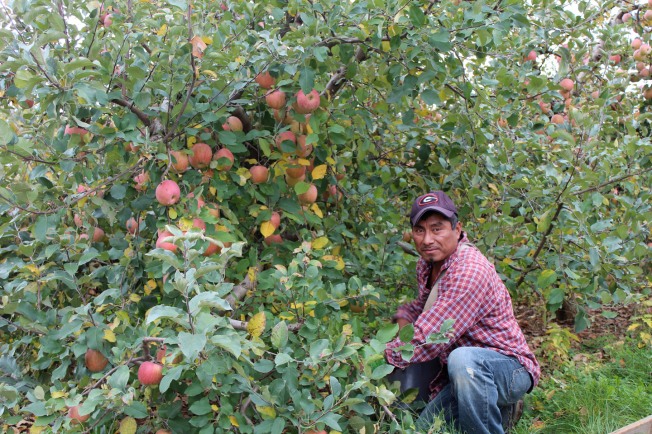 HENRY CHILES, the third generation owner of Crown Orchard in Covesville, Virginia, grabbed his keys and ushered us to his sport utility vehicle at his apple packing facility off Route 29 late one sunny October afternoon. He told us in his slow, raspy drawl that the director of a local food bank wanted to see if he could glean apples from one of Henry’s orchards.

Henry, 77, said that he had told the food bank director that he did not think the apples were any good, but the director insisted on seeing for himself. We met him in a parking lot, and the four of us rode out to one of Henry’s orchards in and around Covesville, 20 miles southwest of Charlottesville. The roads kept getting smaller, the houses further apart. It would have been difficult to find the orchard on our own, hidden behind a border of deciduous trees on a winding hillside.

Henry, though, eventually turned onto a rutted track of red clay soil that led to an orchard. It was a scene of fantastic abundance. Row upon row of lush green foliage trailed away before our eyes, drenched in late-afternoon sun. The trees were positively dripping with perfect-looking, bright red apples.

This seemed a little unusual, since most of the apple crop is picked by late October. But every year and every region is different, so we just soaked in the view. Henry eventually pulled onto the grass next to a row of these apple-studded trees. He slowly walked to the nearest one, cradling one of its luscious-looking crimson fruit in his hand.

He squeezed the apple. It exploded — into dry, mealy pulp. Henry picked several apples from neighboring trees and repeated the process. Beautiful on the outside, every one was rotten beneath the surface. The food bank director searched for a solid one. Eventually he found an apple worth trying, but after one bite he spit it out.

The Red Delicious apples should have been picked nearly three weeks before, Henry told us, but the labor contractor he had relied on for years was not able to deliver enough pickers in time. Apples must be harvested by hand, and a block of trees this size would normally take a crew of 30 to 38 experienced pickers up to two weeks to harvest, depending on weather. That is about one-quarter of the apple pickers Henry needs on hand during the fresh harvest, or else he loses the fruit. Like most food crops, apples, once ripe, will not wait.

Henry tried to line up a deal with a local prison so inmates could harvest the apples, but it fell through. For the first time in a lifetime of growing apples, he had no choice but to watch the perfectly good fruit rot on the tree. His available pickers were needed elsewhere.

“Sometimes you just have to walk away,” says Henry. “It was a hard decision to make, but it was the right one.”

Still, it was painful, especially given Henry’s philosophy: “I don’t plant a tree unless I know where I can sell its fruit.” In all, he lost 75 acres of Red Delicious. At an average of 800 boxes per acre, that amounts to a loss of 60,000 boxes of fresh apples — not because of a weather incident or other natural disaster, but because he could not pick them.

— From America’s Apple, Chapter 8, “Who Will Pick Our Apples?”

JUST FOUR DAYS LEFT for the special, one-time e-book sale of America’s Apple. Through Thursday, August 29, America’s Apple can be downloaded for the discounted price of $2.99 (regularly $9.99). The e-book can be purchased through Amazon for Kindle or as a Barnes & Noble’s Nook Book. The hardcover is available through these sites, numerous bookstores and orchard stores, and Silver Street Media.

With nearly 50 full-color photographs and a photographic index of 120 varieties grown in the United States, America’s Apple takes a detailed look at how apples are grown, and the people who grow them.